by Rochelle Greayer
It goes with the territory that get to try out lots of new plants. Most are nice – but if they can’t pass muster then they don’t stand a chance of getting a write up here.
Definition of Passing Muster:
They have to survive and thrive without any special care, which might not even include regular watering.
I’m tough to please when it comes to low maintenance but still looking nice and thriving.
This fall (2016), follows an unseasonably hot and dry summer. Lots of plants struggled more than normal but there are three plants that are still beautiful despite the torture they have endured. They have rightfully earned a place in my garden for years to come. 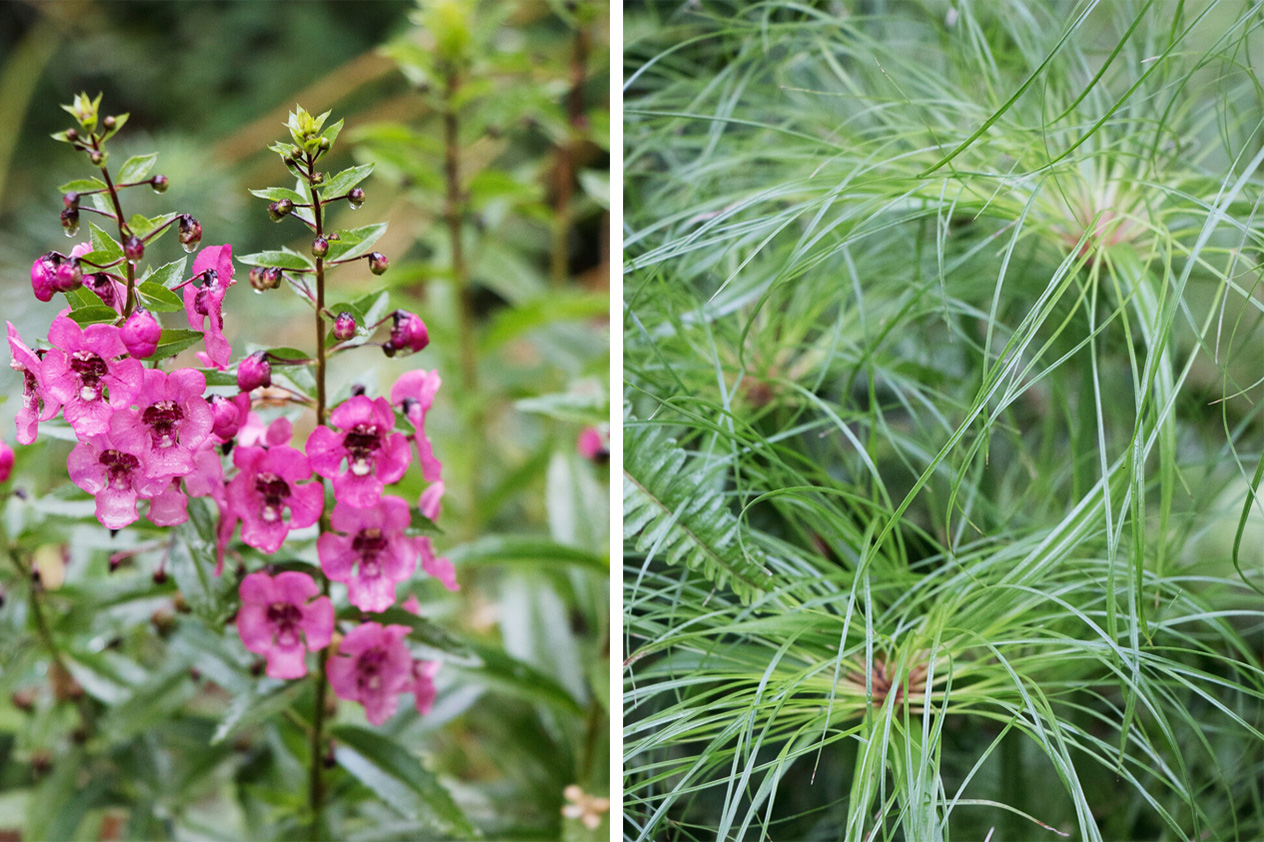 They are ‘Kodiak Orange’ Diervilla, ‘Perfectly Pink’ Angelonia and Prince Tut dwarf-Egyptian-Papyrus. Diervilla is available now, if you can find it – and the other two will be in garden centers for 2017 (so mark this down – you want plant these guys!). 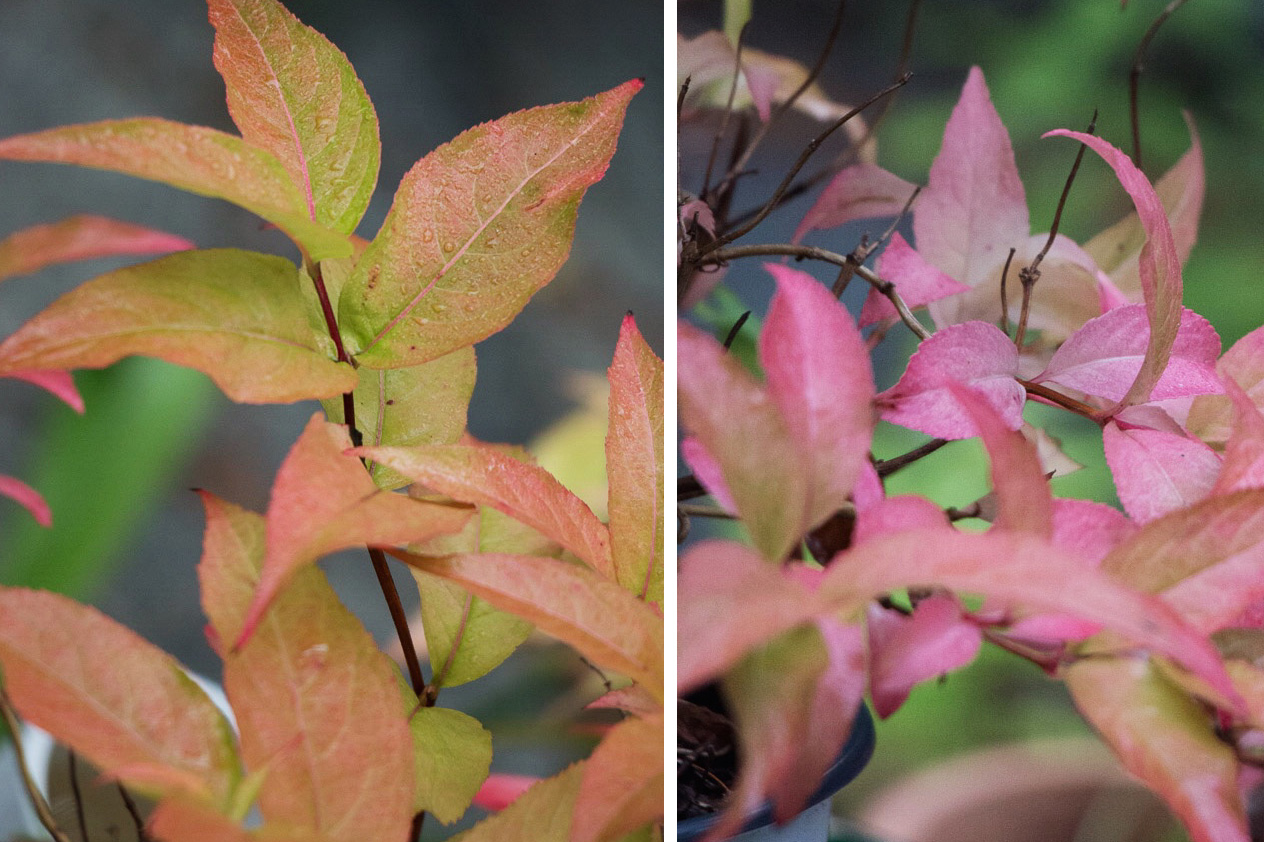 I’ve written about Diervilla before – even before I had given it a chance to fully settle into my garden.  The first thing you will really notice about this plant is its stunning fall color. I am an enthusiast about plants with pretty leaves and nice texture. But lets face it – after a while, a whole bunch of these sorts of plants can start to run together and add up to a whole lot of boring. Diervilla is a fantastic break from the norm and it will spice up any garden.
New England is bracing itself for a short and less than spectacular fall since wehad such a dry summer. But already the diervilla is outshining the surrounding native trees and shrubs. It fades to a peachy-pink and then to a full orange that will make you wonder why you were missing that burning bush.
Summer annuals like Angelonia are not usually something I feel overly enthusiastic about. Being annuals, they quickly fade from memory as I move on to something else the next year. But this is one I will look out for and will buy again.
It covered the basics in that it really performed all year. But I love it for other reasons too. It is a natural beauty – I love a plant that isn’t over-bred to be a just-right shape – a perfect mound, a low dense mat, or a strict column. This would look natural in a meadow – where many annuals would simply look to cultivated to truly fit in. It would fit in a place where we are trying for that cultivated natural look which is particularly popular at the moment. It is also a pretty shade of pink. I’m not a fan of many pinks. I avoid the saccharine sweet candy pinks that I find are too bright but love rich pastels, the deep mauves – this is a beautiful combo of both. I wish I’d have had a many clusters, each of four of five plants rather than just one and next year I will certainly put it to greater use.
The last plant – Prince Tut dwarf-Egyptian-Papyrus – I thought surely would never find a place in my mostly dry garden on top of a hill. I have little area (this year, none) that maintains a natural dampness. So any plant that announces itself as being perfect for a boggy areas or stream side seems disastrous from the start.  But I gave it was whirl in a typical pot (i.e. on an east facing patio in part shade) – and much to my surprise it was a real tough beauty.  Despite struggling through the hottest months, (when I am sure it wished I was a little more doting with the water) it kicked into high gear as we coasted into September. It didn’t grow quite as tall as I’d expect in a wetter environment, but I hardly care because the foliage is so pretty and it really filled out nicely. I find this to be a perfect plant to keep in a pot all of its own. Mix and match it with other single containers and don’t worry that technically it would rather live in a swamp. It will easily give you those pretty heads of grass despite the worst heat.
Papyrus is an annual in northern climates, but I’ve read that it might be possible to overwinter if you are ambitious. (Which I am not .) It easily grew plenty large enough in one season to feel satisfied with buying a new plant next year.
If you grew anything this year that was particularly impressive – I’d love to hear about it!  Share it in the comments.
By Todd Sandoval|2019-01-23T05:14:59-06:00November 21st, 2017|Uncategorized|0 Comments

About the Author: Todd Sandoval